It is no secret that private jets are an indication of the depth of the opulence of some of the wealthiest jet owners on earth. Private jet flights and their fabulous interiors tailored to the tastes of their extravagant owners take flying to a whole new level in a world few of us are familiar with.

Private jet flights whether these include a Cessna, Boeing or other craft are often kitted out to perfection to suit the individual tastes of their wealthy owners.

Roman Abramovich is lucky enough to own a Boeing 767_33A and although this plane appears like any other private plane from the outside, looks can most certainly be deceiving!

The interior of the plane boasts being kitted out with chestnut and decorated with gold. The plane is usually seen at Luton Airport, a stone’s throw away from London, where he spends much of his time as he is owner of the fames Chelsea football club.

Donal Trump not only sports a bad hairdo but he is owner of a Boeing 727-23:

It goes to show that even if you are having a really bad hair day, you can be an owner of a fantastic private jet.

Donald Trump owns a 1968 vintage jet which has been overhauled to seat 23. The interior is beautifully decorated in pale leather armchairs with gold-plated buckles. Furthermore, in typical Trump style crystal lamps and oil paintings complete the look.

To add to all this opulence, the Trump logo which is painted on the side of the aircraft is 30 feet long, four feet high is made of 23 carat gold leaf.

The Sultan of Brunei:

Elvis Presley named his Convair 880 after his daughter Lisa Marie which was customised with 28 seats instead of the usual 228.

Private jet flights are undoubtedly the preferred choice of transport for the rich and famous and according to the latest Forbes Billionaire’s List, there are no fewer than 1 741 members of the ultra-rich club across the globe. It therefore should not surprise that private jet travel and ownership plus the interiors thereof have become a burgeoning business. 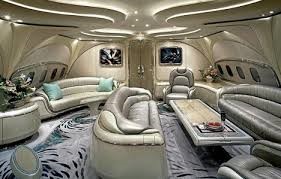 Text5.
ARTICLES
Time Is Money Use a Private Jet Presidents and Their Planes
Scroll to top